First hold peace within yourself, only then can you bring it to others.~Thomas a Kempis
menu
Menu

Mindfulness Retreat in the Tradition of Thich Nhat Hanh

Coming Together to Begin Anew

Thay says, “Beginning Anew is to change your mind and heart, to transform the ignorance that brought about wrong actions of body, speech, and mind, and to help you cultivate your mind of love.”

That’s our focus for this retreat: Using the Beginning Anew practice to renew, refresh and restore our personal practice; to explore how we can change our mind and heart, how we can transform our ignorance and cultivate a mind of love.

Sr. Terry was ordained as a Dharmacharya in 2012.

Terry has offered Dharma talks at meditation and mindfulness retreats and workshops.

Terry is happily married to Gustavo Cortez-Vega and they live in the country with horses, chickens, too many cats, a fat polka-dot pig, a rabbit, two dogs, and various wild critters.

couples and close friends who have agreed to share a room.

Suggested donation of $50 for dana to the teacher.

Retreat attendance will be limited

to 40 in person participants.

will be available via Zoom for those unable to attend in person.

All attendees must register.

Proof of COVID vaccinations will be verified at check-in.

Tea on the Brain

Been a long time since making an entry in this category — tea, but I always marvel at the relationship of tea in Buddhism, Yoga, and meditation. Now here is a neurological explain for human predilection for Camellia sinensis.

Students at the Yoga Path have been invited to share images of the meditation space in their homes. Here are some of the initial entries.

“One of the most important ways you can transform your home space is to make a place to sit. Creating a peaceful sitting area can transform your whole house. This also an important way to support your meditation practice. If we sit in the same place each day, it takes us less and less time to remember to stop and return to our breath. Here, in this place, our bodies and minds can help each other relax”  Thich Nhat Hanh 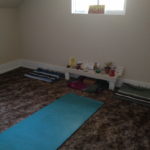 Meditation and yoga help me to be my best self in all my relationships. 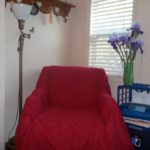 the most comfortable chair in the house. Has a sheet on it because my dog chewed the arms. I love my dog 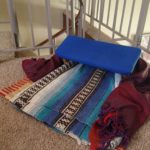 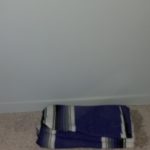 Place for restoring peace in my life. 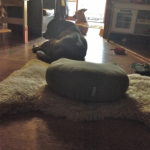 “view from the cushion…dogs settle in for a sit…” 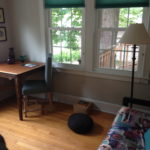 this place of practice is a south-west corner room and it offers lovely light, the sight of a big tree and access to much birdsong 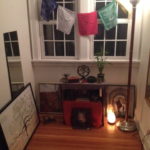 “…I was able to create a dedicated space in our closet”. 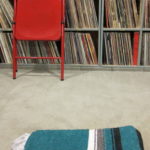 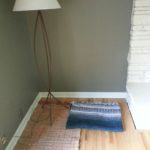 a cozy place to breathe. 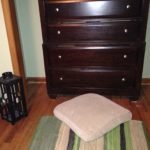 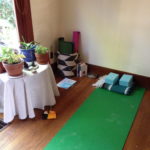 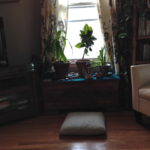 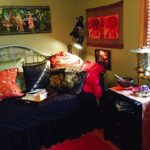 I sit cross-legged here after reading something inspirational 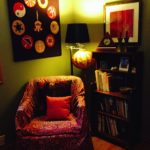 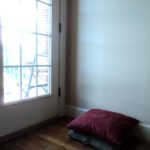 The Miracle of Mindfulness: An Introduction to the Practice of Meditation by Thich Nhat Hanh

Wherever You Go, There You Are by Jon Kabat-Zinn

The Wise Heart: A Guide to the Universal Teachings of Buddhist Psychology by Jack Kornfield

The Science of Enlightenment by Shinzen Young

Breakfast with Buddha by Roland Merullo

Falling Upward: A Spirituality for the Two Halves of Life by Richard Rohr

No Time to Lose: A Timely Guide to the Way of the Bodhisattva by Pema Chodron

Bringing Yoga to Life: The Everyday Practice of Enlightened Living by Donna Farhi

Here is the announcement about Spring Mindfulness Retreat 2014 sponsored by the Honey Locust Sangha / Omaha Community of Mindful Living.

Those of us who come to the Yoga Path, have come to appreciate the tea ceremony at the end of our classes. It is an integral part of the practice. Yet it’s very difficult in America, the land of coffee, to find a decent cup of tea out in the world. One of my students recently shared this story from Orwell with me. It captures much of what I think goes into a good cup of tea. If there are an isolated tea drinkers out there in this coffee waste land, write in. You’re not alone.

A Nice Cup of Tea

If you look up ‘tea’ in the first cookery book that comes to hand you will probably find that it is unmentioned; or at most you will find a few lines of sketchy instructions which give no ruling on several of the most important points.

This is curious, not only because tea is one of the main stays of civilisation in this country, as well as in Eire, Australia and New Zealand, but because the best manner of making it is the subject of violent disputes.

When I look through my own recipe for the perfect cup of tea, I find no fewer than eleven outstanding points. On perhaps two of them there would be pretty general agreement, but at least four others are acutely controversial. Here are my own eleven rules, every one of which I regard as golden:

First of all, one should use Indian or Ceylonese tea. China tea has virtues which are not to be despised nowadays – it is economical, and one can drink it without milk – but there is not much stimulation in it. One does not feel wiser, braver or more optimistic after drinking it. Anyone who has used that comforting phrase ‘a nice cup of tea’ invariably means Indian tea.

Secondly, tea should be made in small quantities – that is, in a teapot. Tea out of an urn is always tasteless, while army tea, made in a cauldron, tastes of grease and whitewash. The teapot should be made of china or earthenware. Silver or Britannia-ware teapots produce inferior tea and enamel pots are worse; though curiously enough a pewter teapot (a rarity nowadays) is not so bad.

Thirdly, the pot should be warmed beforehand. This is better done by placing it on the hob than by the usual method of swilling it out with hot water.

Fourthly, the tea should be strong. For a pot holding a quart, if you are going to fill it nearly to the brim, six heaped teaspoons would be about right. In a time of rationing, this is not an idea that can be realised on every day of the week, but I maintain that one strong cup of tea is better than twenty weak ones. All true tea-lovers not only like their tea strong, but like it a little stronger with each year that passes – a fact which is recognized in the extra ration issued to old-age pensioners.

Fifthly, the tea should be put straight into the pot. No strainers, muslin bags or other devices to imprison the tea. In some countries teapots are fitted with little dangling baskets under the spout to catch the stray leaves, which are supposed to be harmful. Actually one can swallow tea-leaves in considerable quantities without ill effect, and if the tea is not loose in the pot it never infuses properly.

Sixthly, one should take the teapot to the kettle and not the other way about. The water should be actually boiling at the moment of impact, which means that one should keep it on the flame while one pours. Some people add that one should only use water that has been freshly brought to the boil, but I have never noticed that it makes any difference.

Seventhly, after making the tea, one should stir it, or better, give the pot a good shake, afterwards allowing the leaves to settle.

Eighthly, one should drink out of a good breakfast cup – that is, the cylindrical type of cup, not the flat, shallow type. The breakfast cup holds more, and with the other kind one’s tea is always half cold – before one has well started on it.

Ninthly, one should pour the cream off the milk before using it for tea. Milk that is too creamy always gives tea a sickly taste.

Tenthly, one should pour tea into the cup first. This is one of the most controversial points of all; indeed in every family in Britain there are probably two schools of thought on the subject.

The milk-first school can bring forward some fairly strong arguments, but I maintain that my own argument is unanswerable. This is that, by putting the tea in first and stirring as one pours, one can exactly regulate the amount of milk whereas one is liable to put in too much milk if one does it the other way round.

Lastly, tea – unless one is drinking it in the Russian style – should be drunk without sugar. I know very well that I am in a minority here. But still, how can you call yourself a true tea-lover if you destroy the flavour of your tea by putting sugar in it? It would be equally reasonable to put in pepper or salt.

Some people would answer that they don’t like tea in itself, that they only drink it in order to be warmed and stimulated, and they need sugar to take the taste away. To those misguided people I would say: Try drinking tea without sugar for, say, a fortnight and it is very unlikely that you will ever want to ruin your tea by sweetening it again.

These are not the only controversial points to arise in connection with tea drinking, but they are sufficient to show how subtilised the whole business has become.

There is also the mysterious social etiquette surrounding the teapot (why is it considered vulgar to drink out of your saucer, for instance?) and much might be written about the subsidiary uses of tealeaves, such as telling fortunes, predicting the arrival of visitors, feeding rabbits, healing burns and sweeping the carpet.

It is worth paying attention to such details as warming the pot and using water that is really boiling, so as to make quite sure of wringing out of one’s ration the twenty good, strong cups of that two ounces, properly handled, ought to represent.